Guadeloupe's evocative blend of lush natural beauty and rich Creole and French culture make it a magical place to visit. The archipelago is an overseas region of France, and Guadeloupe's food, language, and culture reflect this strong tie.

If you look at a Guadeloupe map, the main landmass resembles a butterfly in shape, with two main islands: Grande-Terre in the east and Basse-Terre in the west, separated by a narrow mangrove channel called the Rivière Salée.

Palm-fringed beaches rim the coastline, and the interior is lush and mountainous, with waterfalls, hot springs, and an active volcano. Most Guadeloupe hotels and resorts and many of the islands' tourist attractions dot the golden shores of these main islands, and Guadeloupe's largest city and cruise port, Pointe-a-Pitre, lies on the southern shore of Grande-Terre.

Wondering about the best places to visit on your trip? Consult our list of the top tourist attractions and things to do in Guadeloupe. 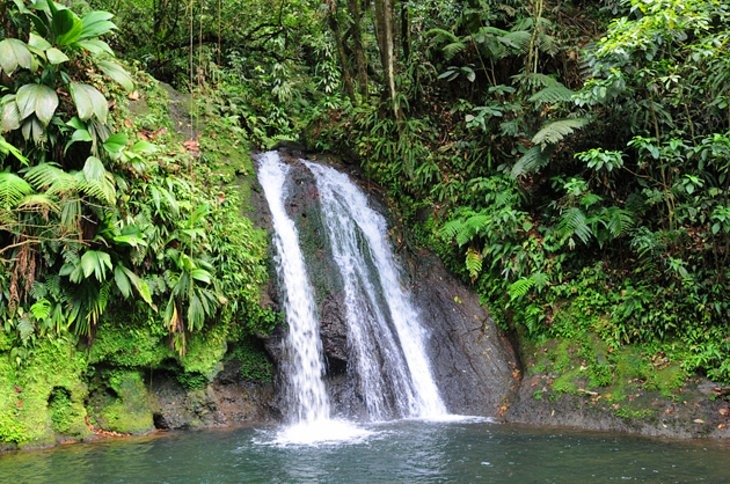 Nature lovers of all kinds will find something to love at Guadeloupe National Park (Parc National de la Guadeloupe). Designated a World Biosphere Reserve by UNESCO, the park often draws more than a million visitors a year.

Among its many attractions are 300 kilometers of hiking trails; La Soufrière volcano at 1,467 meters; Col de la Matéliane at 1,298 meters; and a wide range of plants and animals, including 100 species of orchids and 11 species of bats.

Bird-watchers will enjoy the diversity here, with resident species such as the black woodpecker, pearly-eyed thrasher, and Lesser Antillean pewee.

A good way to take a sightseeing tour of the park is via Route de la Traversée (D23). This scenic trans-coastal highway winds through the tropical forest of majestic mahogany trees and bamboo. Along this route are lookouts, picnic areas, jungle waterfalls, and a staffed roadside center at Maison de la Forêt. You can also stop for a cooling swim at Cascade aux Ecrevisses, a small waterfall spilling into a pond.

One of the unique things to do in Guadeloupe is hike up La Soufrière volcano. You can also take another trail in the park to a series of waterfalls on the lower slopes of the volcano, known as Les Chutes du Carbet (Carbet Falls). 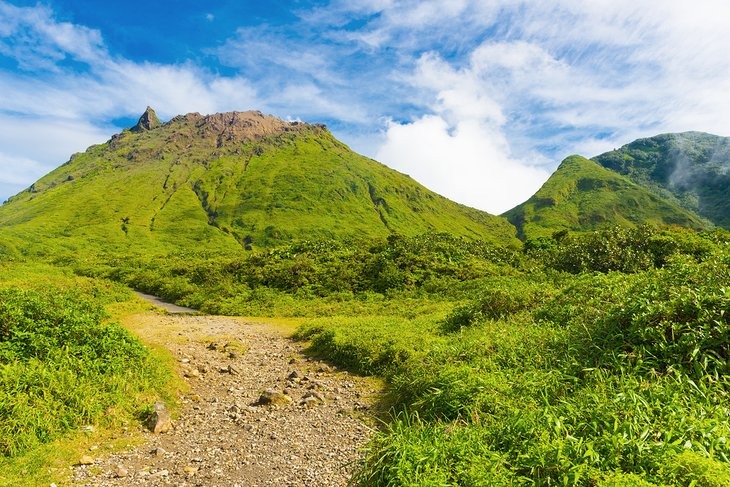 The highest peak in the Lesser Antilles, La Grande Soufrière is an active volcano, which hikers can ascend on the Chemin des Dames trail. This approximately two-hour strenuous climb offers panoramic views from the highest points of the massif - as long as the weather is clear.

Along the way, you'll see a diversity of otherworldly landscapes. Hot springs, mud pools, and fumaroles punctuate the volcano's barren, black sides, and the triple waterfall of Chutes du Carbet flows down the eastern face of La Soufrière massif from a height of 115 meters. You can view the falls from lookouts.

Hikers who follow the trail to Etang As de Pique will find one of the largest of the mountainside lakes formed in craters on the volcanic massif, surrounded by lush hillsides.

Completing this hike requires sturdy hiking boots, plenty of water, and a reasonable level of fitness. Make sure you bring a rain jacket, too.

Interesting fact: The volcano has erupted eight times since 1660, with the last eruption in 1977.